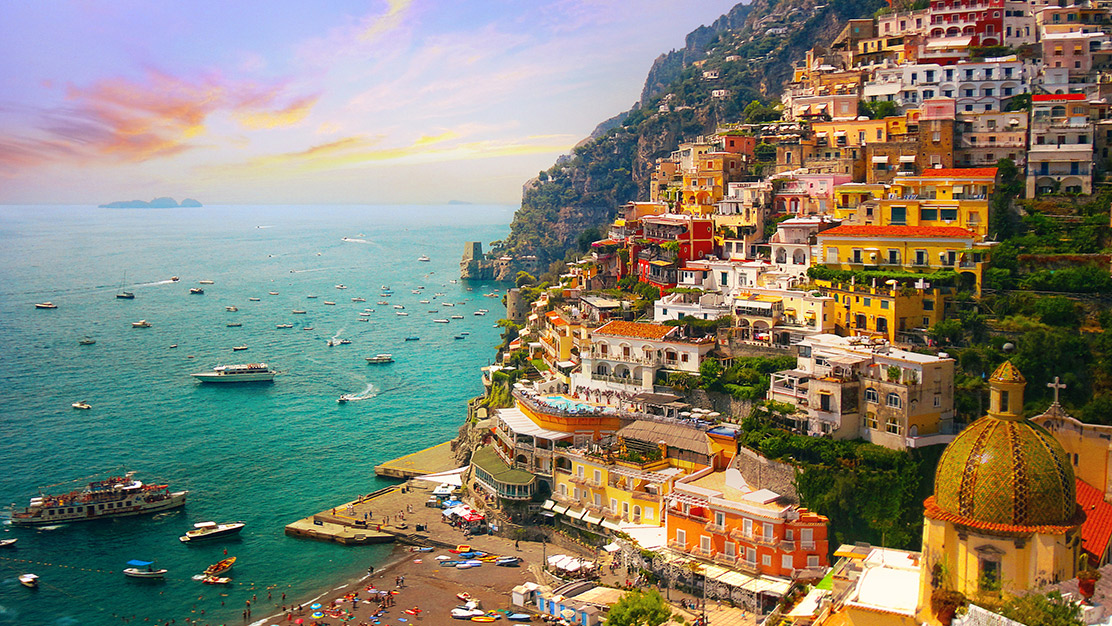 Pearl of the Amalfi Coast, Positano looks like a group of pastel-colored houses clinging to the steep wall of the last offshoots of the Lattari Mountains, which are reflected in a clear sea, surrounded by the intense scent of lemon groves and the bright and bright colors of the bougainvillea.

Following, a maze of alleys and steps between shops displaying the typical products of local craftsmanship, which, together with the undisputed landscape beauties, has contributed to making Positano and the Amalfi Coast famous all over the world.

We refer to the fresh linen dresses in the "Positano fashion" style, to the leather or leather sandals, to the multicolored ceramics and to limoncello.

The panorama extends to Punta Licosa and Capri and, just three miles away from the coast, the three islets of "Li Galli" (the Gallo Lungo, the Rotonda and the Castelluccio) emerge from the sea, once home to the enchanting sirens, and recently by dancers of the caliber of Nurejev and Massine.

There is no certain information about the first inhabitants of the area: there are those who hypothesize a primitive Osco or Piceno settlement. However, as often happens, where history cannot reach the legend which, in this case, tells of a deep love between the god of the sea Neptune and the nymph Pasitea.

The Roman nobility subsequently built their luxurious seaside villas here: one on the Gallo Lungo island (the remains of which, however, are no longer visible as they are located under the modern villa of the choreographer Leonide Massine, who in the 1920s bought Li Galli) and another recently rediscovered during the restoration of the crypt and bell tower of the Church of Santa Maria Assunta.

It followed the fate of the ancient maritime republic of Amalfi and suffered, like the other coastal towns, the continuous raids of pirates.

Already after the First World War it was elected by numerous Russian and German artists and writers as their home, being able to benefit from an atmosphere of calm and serenity here. But it was after World War II that Positano became a popular destination for the international jet-set: painters, writers, artists, actors and directors from all over the world came here to savor the authentic pleasure of a simple and genuine life.

Among the most interesting sites, we mention:

Positano is reached by the motor ships and the trips of the Capitan Morgan with stops between 2 (if combined with another location) and 5 hours.